We are so proud to announce that two of our pupils have managed to reach the finals of the Next Generation Awards (NGA). NGAs have been designed to engage young people in Birmingham to become active citizens who contribute positively to Birmingham’s future! The competition is for schools within Birmingham to think of an idea that could improve their local community spaces. Pupils could win up to £1500 to spend on their idea. 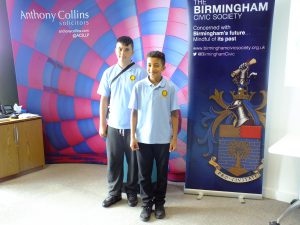 Pupils were tasked to investigate what they liked and disliked about Birmingham. Pupils debated about what would be useful to them in Birmingham and what would be sustainable as an idea.  Pupils began by forming a team- The Dream Team!  Each child played a role in the group and learned about teamwork and leadership skills. Pupils began their research by surveying members of the public.

Many of our pupils at St Paul’s have complex social and emotional needs and it was here that their fantastic idea was born.  Pupils decided they would like to see more inclusion for children with hidden disabilities.  We pride ourselves in Birmingham by being part of a multicultural society and pupils wanted to take this one step further and looked at putting Equality and Diversity into practice.  Pupils came up with the brilliant idea of creating a Sensory Space in Birmingham so that children with similar difficulties could access quiet areas.  We spoke to members of staff at St Phillips Cathedral who were only too pleased to work with us.

On Friday 22nd of June pupils Jack, Mckobie and Sam presented The Dream Team’s initial idea to members from The Next Generation team who visited St Paul’s School to hear their proposal. We were delighted to get through to the semi-finals on 17th July 2018, and much to our surprise and sheer delight Jack and McKobie have made it to the Finals.

The award ceremony is tonight, with pupil’s involved attending with staff.

We use cookies on our website to give you the most relevant experience by remembering your preferences and repeat visits. By clicking “Accept All”, you consent to the use of ALL the cookies. However, you may visit "Cookie Settings" to provide a controlled consent.
Cookie SettingsAccept All
Manage consent

This website uses cookies to improve your experience while you navigate through the website. Out of these, the cookies that are categorized as necessary are stored on your browser as they are essential for the working of basic functionalities of the website. We also use third-party cookies that help us analyze and understand how you use this website. These cookies will be stored in your browser only with your consent. You also have the option to opt-out of these cookies. But opting out of some of these cookies may affect your browsing experience.
Necessary Always Enabled
Necessary cookies are absolutely essential for the website to function properly. These cookies ensure basic functionalities and security features of the website, anonymously.
Functional
Functional cookies help to perform certain functionalities like sharing the content of the website on social media platforms, collect feedbacks, and other third-party features.
Performance
Performance cookies are used to understand and analyze the key performance indexes of the website which helps in delivering a better user experience for the visitors.
Analytics
Analytical cookies are used to understand how visitors interact with the website. These cookies help provide information on metrics the number of visitors, bounce rate, traffic source, etc.
Advertisement
Advertisement cookies are used to provide visitors with relevant ads and marketing campaigns. These cookies track visitors across websites and collect information to provide customized ads.
Others
Other uncategorized cookies are those that are being analyzed and have not been classified into a category as yet.
SAVE & ACCEPT