Last night pupils and staff attended finals for The Next Generation Awards at Highbury Hall Moseley.  It was a much anticipated evening with many schools around Birmingham participating in the event.  The pupils at St Paul’s school took part in thinking of an innovative idea to spend £1,500 to improve an aspect of Birmingham.  Our ideas were to raise awareness of children with hidden disabilities, a cause which is dear to us all at St Paul’s.  Our idea was to create a sensory tree or area in Birmingham to allow anyone who may be stressed, even Parents, to have a safe and quiet area to calm down. 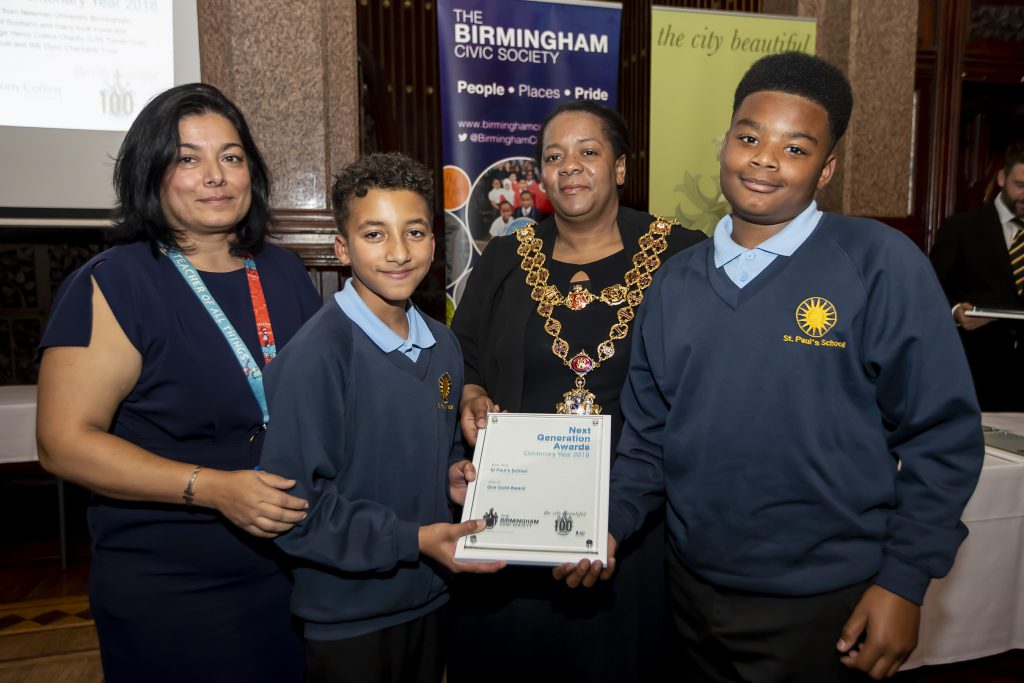 Last night we reached a pinnacle in the event, where pupils at St Paul’s were up against some of the higher profile schools and able pupils in Birmingham.  Unfortunately, we didn’t win but we surprisingly won an alternative prize!  Turves Green School came first to win and then there was a surprise cheque that had been put forward last minute.  As the speech continued after the winners were announced the Head of SEND provision for Birmingham, Julia Davey, spoke of difficulties faced by pupils coming from Social and Emotional backgrounds with hidden disabilities.  Our hearts began to pound with the anticipation, was she speaking of us? Yes! A last minute surprise was in store for us! We were awarded £500.00 for our idea!

Well done to Mckobie and Kion for their relentless commitment to this project and presenting their idea so eloquently.  They showed charisma, sophistication and above all bravery in speaking in front of complete strangers.  They overcame huge barriers and proved to themselves that they are head and shoulders above anyone their own age and ability.  I’m so proud of these pupils and the support of staff at St Paul’s.  Here’s to next year’s competition.  WE ARE READY!

We use cookies on our website to give you the most relevant experience by remembering your preferences and repeat visits. By clicking “Accept All”, you consent to the use of ALL the cookies. However, you may visit "Cookie Settings" to provide a controlled consent.
Cookie SettingsAccept All
Manage consent

This website uses cookies to improve your experience while you navigate through the website. Out of these, the cookies that are categorized as necessary are stored on your browser as they are essential for the working of basic functionalities of the website. We also use third-party cookies that help us analyze and understand how you use this website. These cookies will be stored in your browser only with your consent. You also have the option to opt-out of these cookies. But opting out of some of these cookies may affect your browsing experience.
Necessary Always Enabled
Necessary cookies are absolutely essential for the website to function properly. These cookies ensure basic functionalities and security features of the website, anonymously.
Functional
Functional cookies help to perform certain functionalities like sharing the content of the website on social media platforms, collect feedbacks, and other third-party features.
Performance
Performance cookies are used to understand and analyze the key performance indexes of the website which helps in delivering a better user experience for the visitors.
Analytics
Analytical cookies are used to understand how visitors interact with the website. These cookies help provide information on metrics the number of visitors, bounce rate, traffic source, etc.
Advertisement
Advertisement cookies are used to provide visitors with relevant ads and marketing campaigns. These cookies track visitors across websites and collect information to provide customized ads.
Others
Other uncategorized cookies are those that are being analyzed and have not been classified into a category as yet.
SAVE & ACCEPT